So, ahem, yeah- what happened to this little blog of mine? I guess I have to get my ass in gear, kinda.

For your viewing pleasure is the actual photo from Roads on Her Face: The Safari Photo. Her very nice note on the back indicates that any of suspicions I had about her were most likely wrong. I mean, I AM usually the one making things up about other people.

Mom let me take it and scan it, barely- I think it’s one of her favorites. Note: Me, perpetually with a book in hand- and Soph with a fistful of dollars from somewhere. 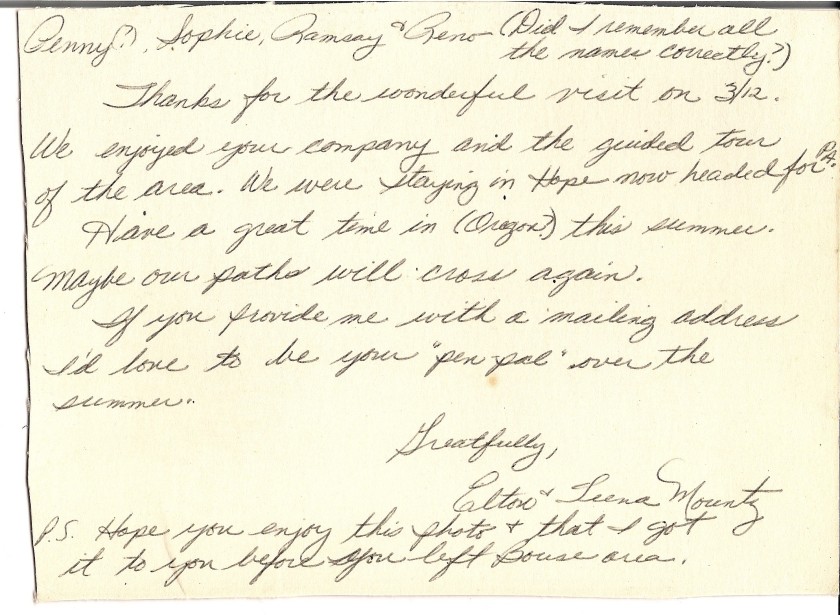 To the Mountzes, if you’re out there- I hope you don’t mind me putting your name on the interwebs.

There is a photo that sits, dusty and generally unnoticed , over my mom’s bed next to mementos of her travels and souvenirs brought back from mine and others, family photos, and “art” pieces made by her children out of clay or popsicle sticks over the years. It’s the cover of a pre-made greeting card, and there’s a note inside from the photographer saying she had enjoyed meeting us. We had few visitors at Jim’s Place in the desert outside of Parker, Arizona, and when I try to imagine what they thought when they arrived I smile. Did Jim and Bobbi Jo bring friends out there to show us off, like a circus attraction? Did they prove their generosity by parading the family of vagrants they had living on their desert land, marvel at our hard life and self-sufficiency? I don’t know. I know this woman who took the photo was moved by us, these hardscrabble little desert rat children in the middle of the punishing heat of the Mojave. We are in a posed group, the four of us, on white plastic chairs or standing. We look scruffy, and so very young. My sister, the youngest, must have been 2 or 3. We wear torn and dirty thrift store clothes, and at least one of the boys wears a once-white baseball cap with the velcroed-on shade flap for the back of his neck, patented by my mother’s brother as one of his frequent get-rich-quick schemes that never quite panned out. Our smiles are shy but proud, as if we never considered that others would look at us as people to pity.
I don’t even remember if the woman and her husband were friends of the landowners or people who happened to be driving by. We could hear vehicles coming almost as soon as they pulled off the highway onto the dirt road, 40 miles away. It was a hum in the air, a faint change in the atmosphere before we could hear the sound clearly. The county road was about ¾ of a mile from our trailer. We could be at the turnoff to Jim’s Place to meet visitors long before a vehicle traversed the miles from pavement. Did Dad sit out there with a chair and a beer, creating a figure that the curious would have to stop to inspect? Or did he meet them in Parker at a bar or the convenience store? I’ll ask my mother, and see how her memory as an adult differs from my perspective as a child. I will ask her if she was embarrassed for people to see her this way, if she worried that others might think she wasn’t caring for her children properly. She kept us as clean as you can keep active kids in the dirt of the desert, kept us clothed and fed and healthy. But she’d lived in “normal” society, in a house with two working parents in a neighborhood in a town where others watched how you behaved, judged you by how you dressed. She must have felt a kind of shame knowing how others might think of her. If not how other perceived how she cared for her children, did she consider what they thought about why she put up with the domineering treatment of the man she’d chosen to share her life with? It was apparent even to strangers that my mother was a second-class citizen and not a partner, blatant in Dad’s gruff commands to fetch him a beer, in the way he talked down to her and told rather than discussed.
I imagine this stranger with her clean clothes and fancy camera asking to take our picture, and us gathering around as if it were a fun occasion instead of a wildlife safari opportunity. I’m sure she was a mother, and tenderly gathering this trophy as a vacation highlight instead of as a hunter of photos of the disadvantaged. I myself, now, from the comfort of my middle-class life, would have taken the same photo of us or of children in Africa with flies at the corners of their eyes.

My name is Mary Ramsey….Roethle.

Why the pause in your name?

Chuckles. I wanted to make sure Ramsey got in there cuz that’s really who I am. Roethle is you guys’ name.

Why did you take that name?

Cuz I wanted to have the same name you guys had.

Did you ever legally take that name?

Uhh..no. Not really. Kind of. Laughs. Right after I met your dad and he wanted to get married…we just kind of had our own little ceremony. So I took my Ramsey driver’s license…we were living in Prescott, Arizona. And.I was young, and I was….pretty and there was a man in there that was the DMV officer, and I told him that I had just gotten married and I wanted to get a new driver’s license. And he didn’t ask to see any proof. Laughs.

What year was this, do you think?

Laughs. We were in Las Vegas. We were standing out in front of Circus Circus hotel, just out in front there. And we said a little ceremony to each other, and that was it.

It was a creepy place.

Why did you decide to get married?

Because I loved your dad. I was in love with him. And I was perfectly happy to spend the rest of my life with him. So I thought. At the time.

So how old were you, and how old was he?

You guys were young. That’s a lot of years together.

It’s more fun to tell stories than to talk about logistics, but the logistics of “how stuff happened” are always the parts people want to know more about. How did you eat? (Mostly with our mouths). Where did money come from? (It grew on trees). How did you get so smart? (I didn’t go to public school, much).

School the way most kids did school wasn’t really a viable option, given Dad’s penchant for pissing people off, landing in jail, or general anti-social tendencies. It’s hard to catch the bus when you’re 40 miles on a dirt road from the nearest bus stop. School officials tend to ask questions that no one is prepared to answer, such as “Where are your school records? Do you have an address or a phone number?” Somehow, we were accepted at many schools all across the country, mostly I imagine because we brought in extra cash to the district as low income little desk-occupiers. No one ever followed us when we left after a few weeks or a month, and I wonder if anyone ever noticed. I didn’t get too close to most of my school acquaintances, who were usually of the lonely outsider type anyway. They were just glad to have someone to sit with at lunch, and I was glad not to have to try to talk to a group of kids at once. I was much better one on one. I didn’t particularly want them to come over to play in our trailer or car, and I wouldn’t have known what to tell them when they started asking questions. I was savvy enough to know that I was vaguely ashamed of us, but also proud that we could make it living this way when I knew most of the people we met hadn’t the vaguest idea how we survived. I liked the idea of being self-sufficient, and still do, though now I realize how heavily we relied on government aid most of the time.

Now, I want a homestead off the grid somewhere in the hill country in Texas. I want chickens, and maybe mini-goats, an art studio, and a big spread that I can fence off and hide in. I’ll fit right in in Texas.

So, school- my mom’s daddy, Papa, had put some money aside in a savings account for me when I was born. Instead of having it for college, it got tapped into much earlier to enroll me into an expensive Christian satellite school program- well, expensive for homeless folks. I think it may have been between $200 – $500 for the whole school year, very cheap especially considering the quality of the education (even with all the Bible parables sprinkled in). I’m guessing some of the rest of that money went to food, and probably beer. We were able to get the student and teacher books, the tests, study guides, and lesson plans. I would do school in the morning and have the rest of the day off. When a dedicated kid sits down and completes all the schoolwork typical in a normal public school day, she should be done before noon. So much time is wasted in timekillers, recess, and babysitting that it’s no wonder kids are so under-educated. By the time I surpassed my mom’s math education, I was easily schooling myself and honestly grading my own work. The other kids were young enough that reading and some math and coloring were good enough, and by the time we settled in one spot and enrolled them in public school for the rest of their school years, they only had a few missing years of education and still easily tested into their respective grades. They went to a small New Mexico school that also needed more desk-warmers, and the accompanying grant money.

I went to two full years of public school my last two years of high school, where I got the requisite sexual and partying education every teenager needs. I didn’t even go to some of my classes and still got straight As. I helped the overloaded teachers by explaining geometry to a few of the other students, and they overlooked my occasional truancy and low-cut blouses. I got a full ride to college, too.